This is a progress report on the construction of the apparatus for the Fiber-Optic Michelson-Morley Experiment (FOMMX). The first phase is mechanical, to be followed by electrical, data-taking computer, software, communications, laser/optical fiber phases.

This strictly mechanical phase is perhaps 80% complete. The completed assemblies are shown in the photograph and described below. The main assembly that is not yet done is the motor support frame.

FOMMX components in the picture:

This is the first time that all of the assemblies that have been built have been lifted in the intended manner by the hoist. In this picture, the hub is a foot off the floor, although not immediately apparent. It is directly above the brown piece of cardboard. Thus the post title "Lift-Off". (No rocket engines have been fired in this process.)
at September 04, 2018 No comments:

The Hub Assembly is Built.

Here is the drawing that I prepared for this assembly and the physical result. The beams are aluminum extrusions from 8020.net . The beams have "T"-slots on each face to enable the beams to be connected to each other or to something else. The corner connectors and hardware are also from 8020. The weight is 9.4 pounds. 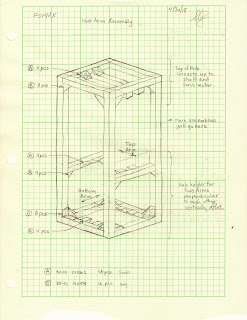 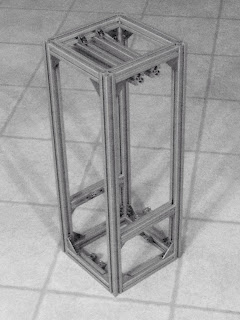 According to the Ether Theory of the 1800's, the motion of a hypothesized medium called Ether past the Earth affects the speed of light. In 1887 an experiment was done that shocked physicists because it was inconsistent with the Ether Theory, the dominant theory of that time. It is called the Michelson-Morley (M-M) Experiment.

Following this experimental rejection of the Ether Theory, relativity theories were developed to explain the 1887 M-M results. Beginning at the same time, M-M experiments were performed with various modifications. Almost all experimental results were consistent with relativity. Mainstream physicists would say that all valid experiments are consistent with relativity. By 1920, Relativity theory was generally accepted and Ether theory was discredited.

Based upon 100 years of such experimentation, I have identified two parameters that unexpectedly affect the M-M results. These parameters are characteristics of the light path within the apparatus of the M-M experiment.
The extent of the light path is defined here as straight line distance from one point in the light path to another. Conventional Michelson-Morley experiments used mirrors to direct the light path to retrace itself and multiply the small interferometric effect by the number of traces. That principle is useful and still applies here, although it is incomplete.

The mass density and geometric extent can be thought of as the sensitivity of the interferometer.

I am preparing to test these conjectures by performing an experiment that is a variant of the Michelson-Morley experiment.

The objective of this experiment is to test the combination of mass density and light path extent most likely to contradict relativity in the M-M experiment.  Based on the above observations, this would have a dense material in the light path and a light path with a large extent.

This combination of parameters can be achieved by using optical fiber rather than the mirrors used in earlier M-M experiments.

In addition, fiber optic systems do not require the demanding alignment process that is required by mirror systems. Finally, the fiber optic approach is far less expensive than the mirror approach. See: Component Cost for Experimental Apparatus.

This experiment does employ a fiber optic light path, as described. The straight arm length is 16 feet.  I call it a Fiber-Optic Michelson-Morley Experiment (FOMMX).

For more detail on the above argument, see FOMMX Grant Proposal to NSF.
For a full mainstream description of the Michelson-Morley experiment, see the Wikipedia.

The Fiber Optic Michelson-Morley sensor is two “arms”, or straight lengths, of optical fiber. These will each be 14' long and set perpendicular to one another in a horizontal plane. These arms will rotate as a unit in the horizontal plane when operating.

The purpose of the hoist is to lower the interferometer for maintenance (and initially, construction) at floor level and raise it to the ceiling for collecting data. This has the side-benefit of clearing the the floor area for general use while collecting data, which will be almost all of the time. 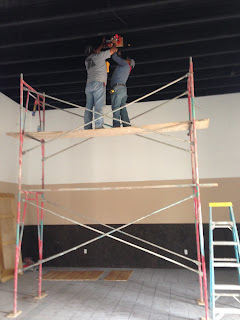 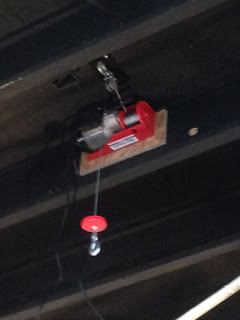 Installing the hoist in the lab. The hoist installed and ready for action.

This marks the beginning of construction of the FOMMX apparatus.
at March 16, 2018 No comments:

The Structure of the FOMMX Apparatus

The apparatus of a Michelson-Morley experiment measures the instantaneous difference in the speed of light in two perpendicular directions and repeats this measurement over a variety of orientations. These results are combined to show the velocity of a presumed ether through the solar system.

The general approach is to direct light along two perpendicular arms and interferometrically measure the difference in speeds between the light-paths in the arms. The arms are horizontal and rotate about a vertical axis a few times a minute. The horizontal plane of rotation sweeps through a large portion of the sky each day. These rotations provide the variety of orientations needed for calculations.

The sense element of the arms is an optical fiber which lies in a tray, which in turn lies in a clear acrylic tube 3 inches diameter. The straight length, end to end, of the fiber is about 16 feet, a bit longer than the straight light path of Dayton Miller's apparatus. One arm includes two 8 foot lengths of tube joined to the hub. The sixteen foot arm's tubes are supported by beams that are aluminum extrusions. The rotation of the arms is driven by a servo-motor attached to the ceiling of the lab. The motor-shaft is connected to the hub.

The hub holds a number of components in addition to the two 16 foot arms. This includes a DFB diode laser, two photodetectors, a data logging computer, and fiber optic components. The components that produce heat are placed above fiber components to avoid potential thermal variations in the fiber that might affect the interferometric signal.
at March 12, 2018 1 comment:

I have just completed a detailed design of the apparatus, not yet fully documented. This was a grueling quick-study of diode lasers and optical fiber as applied to commercial products for laboratories. The analysis includes detailed component costs to set up the apparatus and begin collecting data and is estimated at $7,317.15. Plus or minus. Probably plus.

The 2011 Nobel Prize in Chemistry was awarded for the discovery, in 1982, of Quasicrystals.

Quasicrystals produce patterns of sharp points, as crystals do, but the symmetry of these points is forbidden in 3D space.
A "six-dimensional cubic lattice" can be projected onto a three-dimensional Euclidean space so that the lattice points coincide with those of a Quasicrystal. (See en.wikipedia.org/wiki/Quasicrystal and search for "six-dimensional")

The physics community does not attach any physical significance to this mathematical fact since our space is considered to be three-dimensional (or four-dimensional if relativistic space-time is considered). The six-dimensional Euclidean space has no connection to string theory or any other theory.